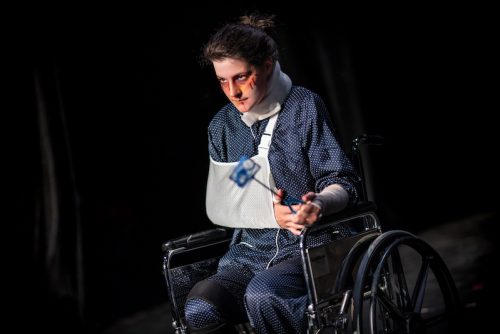 White Comforter: Get Some, with Carol White

Are you Getting Any? Carol White won’t wait until she’s dead to sleep, and neither should you. Carol White takes the stage having come out a debilitating history of sleep loss, only to have developed a world-renowned solution for all who suffer. Carol leads the audience through a Guided Sleep Meditation, as it shouldn’t matter who are in order to deserve rest. GET SOME with Carol White.

A darkly satirical story. Watch this Mother-to-Be prepare her feminist fetus to face the world with diamonds on her ears.

ArchDuke Oblong and Crown Prince Oboe rule the land, maintaining its upper-class traditions. But, unbeknownst to them, their kingdom is in a time of upheaval. Things cannot continue as they have and the two clowns must learn how to give up their power and wealth.