Something in the Water

Something in the Water 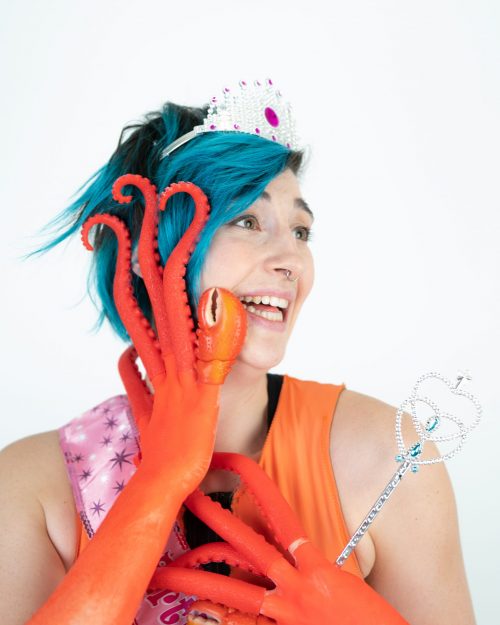 “If you like your theatre madcap, thoughtful and combined with what's-coming-next intrigue, don't miss out.”

Directed by Deanna Fleysher & Mind of a Snail Puppet Co.

A comedic deep dive into identity, gender and what it means to be normal. When Grumms transforms into a sea monster with squid genitals (think Creature from the Black Lagoon meets The Muppets), they must hide their identity and try to pass as a “normal, human woman”.

You’ll be spellbound by stunning video projections, slapstick and satire; all stirred up together with Grummett’s glowing and playful performance. A perfect balance of absurdist physical comedy and vulnerable self-exploration, the show weaves a touching story of acceptance that anyone can relate to. Inspired by performer/creator, S.E. Grummett’s experience coming out as transgender, Something in the Water is a celebration of the “not normal”.

‘If you like your theatre madcap, thoughtful and combined with what’s-coming-next intrigue, don’t miss out’ (The Advertiser).

Grumms is a queer, transgender theatre artist from Treaty 6 Territory. After graduating from acting school and becoming increasingly frustrated with the lack of opportunities for queer and trans folks, Grumms began Scantily Glad Theatre, an 2SLGBTIQ+ theatre company that works to promote queer artists and stories through comedy, clown and physical theatre. So, they began making and performing their own work. For them, self-creation was, and continues to be, a way out. Over the past 5 years, Grumms has created a body of original queer work and toured it to festivals and stages around the world. They are the co-creator of “SCUM: a manifesto”, “Pack Animals” and “Creepy Boys”.

Their solo-show, “Something in the Water”, won Best Theatre at the Adelaide Fringe and was recently selected by the High Commission of Canada for Spotlight Canada 2021 at the Edinburgh Fringe. Outside of self-creation, Grumms also works as a performer, puppeteer & video artist.

Sam Kruger (he/him) is a performer and theatre maker in Saskatoon, SK. His solo shows Fool Muun Komming! and Bat Brains or (let’s explore mental illness with vampires) have toured throughout North America winning various awards (Pick of the Fringe – Edmonton Fringe, Just For Laughs: Best Comedy Award – Montreal Fringe, among others) and widespread critical acclaim. He holds a BA from the University of Minnesota and is a graduate of the ecole Philippe Gaulier in Etampes, France. Sam Kruger has worked as a stage manager for Pulsive Party (Vancouver, BC), and is a sound designer/engineer. Earlier this year, Sam and Grumms made their in-person premiere of their duo clown show, Creepy Boys at the Twin Cities Horror Festival in Minneapolis, MN.

Deanna is a comedy artist, teacher and director devoted to interactive comedic experiences. She created Foreplay, an erotic improv comedy show that ran for a year at the People’s Improv Theater in NY and was featured at the Chicago Improv Festival. She created, produced and starred in Kill Me Loudly: A Clown Noir and The Kapinski Private Eye Academy at the NY Clown Theatre Festival. She created the Naked Comedy Lab, a workshop for training in interactive comedy and hilarious vulnerability. She is the director and co-writer of Red Bastard, the internationally-acclaimed bouffon show. Currently, she tours her award-winning solo show Butt Kapinski (as seen at Hutch Festival in Vancouver) and teaches Naked Comedy labs in Los Angeles and around North America.

Mind of a Snail – Collaborators

Mind of a Snail is a shadow puppetry duo currently based out of Vancouver BC. Since 2003, Chloe Ziner and Jessica Gabriel have been developing a multilayered style of visual storytelling using overhead projectors as their main light source. Their performances play at the intersection of puppetry, visual arts, clowning & music. As artistic collaborators, they are interested in exploring beyond the boundaries of traditional theatre, and creating magical immersive experiences for their audiences. Mind of a Snail’s shadow theatre is like an early animation created live before your eyes.