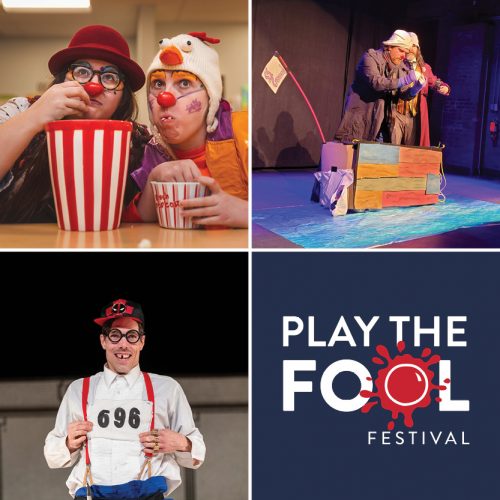 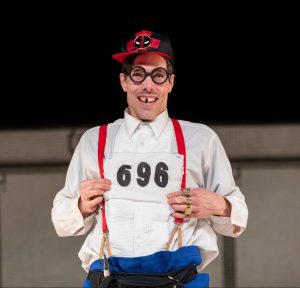 Mario “Superstar” Mario wants to go on the TV show America’s Got Talent, but doesn’t quite understand what a good performance is. The spectators rate the acts Mario has prepared for his audition. Hat manipulation, limbo, singing, and magic! mariosuperstarmario.com

Dr. Joseph Culpepper is a performance scholar, magician, and magic consultant. Joe is an Associate Researcher and instructor at CRITAC (the Center for Circus Arts Research, Innovation and Knowledge Transfer) at the National Circus School of Montreal. He teaches magic history and its adaptation to the circus arts. He is a cofounder of the performance collective Ars Mechanica, a member of The Magic Circle in London, and works as a consultant for both private and public organizations. Dr. Culpepper holds a PhD in comparative literature from the University of Toronto. His dissertation, “Reception and Adaptation: Magic Effects, Mysteries and Con Games,” analyzes how individuals experience magic through various media.

Yves Dagenais has more than 40 years of experience as a clown, director and teacher. He has toured the world with his character Omer Veilleux and has a great recognition all over the globe for all of his work. 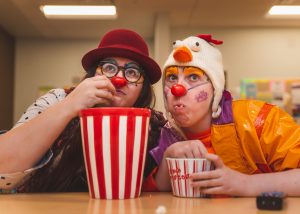 Through their horrifying experiences with haunted houses, seances, and exorcisms, singing duo Scamp and Shorty explore fear and the most terrifying emotion of all- boredom.

Erin Hutchison is an Edmonton-based clown, actor, director, playwright, and the Artistic Director of Cathexis Theatre. After graduating from the Theatre Arts program at MacEwan University Erin wrote and directed three musicals under her theatre company. Since discovering her clown in Jan Henderson’s Clown and Mask intensive, Erin has been creating, and performing various shows with her partner in clown, Emily Smith.

Emily Smith is an Edmonton based clown, writer and performer. She graduated from the Theatre Arts Program at MacEwan and then went on to study under Jan Henderson in her Clown and Mask Intensive. Since then she has been performing turns with her clown partner, Erin Hutchison and has been seen performing clown at Play the Fool, Nextfest, and Grindstone.

Jan Henderson is one of Canada’s leading teachers and directors of Mask and Clown. Through her workshop company, Fool Moon Productions, she has devoted the last 40 years to helping people get in touch with their most authentic, playful and creative aspect – their inner Wise Fool – and use it to enrich their personal and professional lives. Jan teaches clown for The Clown School, Opera Nuova, and the Citadel Theatre’s Young Company, and Neutral Mask at Grant MacEwan University, and the University of Alberta, where she has received four awards for excellence in teaching. She is a recipient of Global Television’s Woman of Vision Award, and the 2018 Elizabeth Haynes Stirling Award for Outstanding Contribution to Theatre. Jan’s lifetime of work is celebrated in the documentary, The Wise Fool, directed by Geraldine Carr of Shiny Carr Productions. www.foolmoon.org 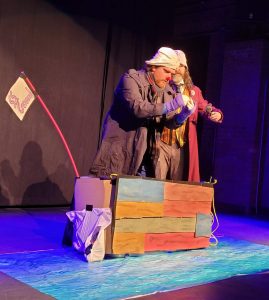 Created and performed by Chad Bryant

The cantankerous Croomb has decided it is time for some rest and relaxation. What better way than to go fishing!

Chad Bryant discovered clown by watching a clown duo perform a turn at the Calgary Fluid Festival Cabaret in 2015. He spent the next summer at the Manitoulin Conservatory for Creation and Performance to learn physical theater where he studied mask and clown work extensively under John Turner. Currently he is an active member of the Calgary clown community and a supporter of everything fun, funny and weird.

Chris Gamble is a clown, husband and father. He firmly believes in family and fun! He has spent the bulk of his life pursuing a career in theater and the arts. As such, he has developed many hidden talents such as: singing, playing guitar and jumping off of suitcases! Chris is a Drama instructor for the YMCA and Artistic Facilitator with Inside Out Theatre. He believes in a fair and compassionate world and the support of art for everyone. As a member of the Calgary Clown Society he hopes to provide opportunities for anyone interested in learning and exploring the fantastic world of clown.