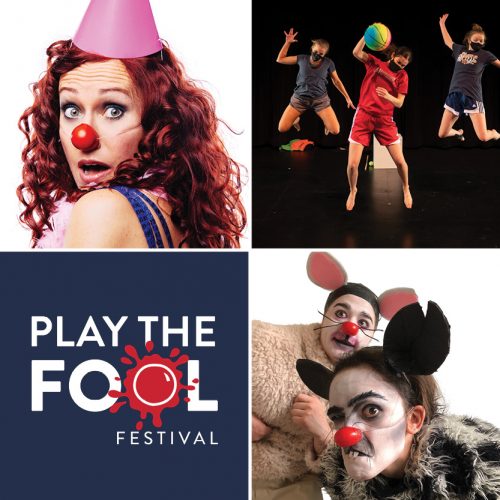 Fingers is the last rat in Edmonton. Or so he thinks, until one day he finds a curious and innocent baby rat named Shrimp. Eager to preserve his Edmonton rat legacy and finally have a friend, Fingers creates the Rat Academy to teach Shrimp how to survive as a cold, hard, street rat.

Katie Yoner (she/her) is an actor, improviser, writer, and singer based in Treaty 6 Territory and within the Métis homelands and Métis Nation of Alberta Region 4, traditionally known as Amiskwaciy Waskahikan (Edmonton). She is currently completing her third year of the BFA Acting program at the University of Alberta and in her spare time she loves to perform stand-up comedy and juggle. Recently, she completed a clown course with Michael Kennard which culminated in a solo performance, and prior to this she studied mask with Jan Henderson and clown with Jaqueline Russell at the University of Calgary. Her most recent credits are Lady Macbeth in Macbeth (University of Alberta), Exploding Uncertainty (University of Alberta), Win the Warrior (Edmonton Fringe) and Two Pin Idiot (Edmonton Fringe).

Dayna Lea Hoffmann is a mixed-race multidisciplinary artist and actor from the Unceded Coast Salish Territories colloquially known as Surrey, BC. She has a strong passion for creation, collaborative work, film, and clown and hopes to share these passions with audiences across Canada. For the last two years, she has been living in Treaty No. 6 Territory (Edmonton) honing her skills of clown, acting, dance and juggling while attending the University of Alberta’s BFA Acting Program. She additionally holds a diploma in Theatre from Douglas College, is a former performer, student and teacher of the Vancouver Circus School, and an alumni of Canada’s National Voice Intensive. Outside of traditional theatre, Dayna is an experienced physical theatre artist with a strong focus on circus, dance and clown. She has worked with many of Canada’s leading practitioners such as David MacMurray Smith, Jan Henderson, Michael Kennard, and Lin Snelling. She is also a student of Maître D’armes JP Fournier and has been trained in rapier and dagger, sabre, and unarmed combat. She has been experimenting with translating clown to an online medium, creating six original short clown films that can be found on her youtube channel. She has participated in Play the Fool’s short film contest for two years and was nominated for an award in 2021. Dayna is also a 2021 recipient of the Roger S Smith undergraduate research award and created a research-performance documentary examining gender and clown entitled Why Aren’t Women Funny. 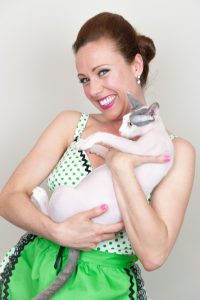 From the Creator of Fringe hits “ONEymoon” “Chaotica” and “All Kidding Aside”, actor/performer/clown- Christel Bartelse brings you a theatrical showcase of characters, some human, some not. A hilarious & quirky solo show adventure!

What the Critics are saying:

“Some performers just have it . . . Christel Bartelse is one of those performers.” – Raise The Hammer

”Christel Bartelse is filled with pure energy and has no trouble engaging the audience.” – Hamilton Today

“She’s a brave performer, and isn’t afraid to get into awkward positions, or to tell us the gory details of what giving birth really entails.” – Mooney On Theatre

“Tina Fey, Jane Lynch, and Amy Sedaris…Bartelse would not look out of place next to these” – Laurence Brown, King of Indiana

​“Bartelse, who starred in last year’s Fringe hit, Circle, confirms her status as one of the most talented performers to visit London” – London Free Press

“A skilled physical comedian, she really knows how to use her body to generate laughs” – Theatromania- NYC

Christel Bartelse is a multi-faceted artist based in Toronto. She got her start in comedy with the physical comedy duo, The Burnt Marshmallows (Canadian Comedy Award Nominees). She went on to create and write six award winning Solo Shows (Chaotica, ONEymoon, Significant Me, All KIDding Aside, The Surprise and Encore!) and have toured them all across Canada, the U.S. and the U.K.

She is the Co-Producer & Co-Host of the Toronto Storytelling Show “But That’s Another Story” and is also the co-producer & co-host of the Variety Cabaret “Chris and Christel’s Collection”.

She discovered theatrical clowning at the age of 20 and honed her skills with some of the top instructors, Mike Kennard, John Turner (Mump and Smoot), Sue Morrison, Philippe Gaulier, Francine Cote, Andy Massingham, Caroline Dream.

She’s been teaching for the past 15 years, leading a variety of workshops in improv, clown, physical comedy, solo creation and is a proud faculty member of Humber College, The Toronto Film School, George Brown College. She also is the co-founder of Comedy Coop. The first online comedy school for women. 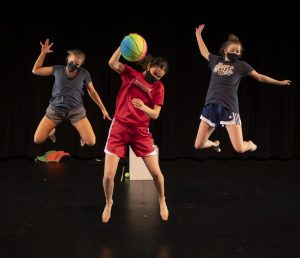 Every current summer and winter Olympic sport in 14 minutes.

Anastasia Maywood (Choreographer) has worked as an independent choreographer, dancer and producer based on Treaty 6 territory in Amiskwacîwâskahikan. She holds a BA Honors (Drama) from University of Alberta (Edmonton, AB) and an MFA in Choreography from York University (Toronto, ON). She was the recipient of the 2015 Good Women Dance Collective’s New Dance Award. Anastasia has presented her work in Edmonton, Calgary and Toronto and has performed for a variety of choreographers and theatre companies. In 2021, her physical dance/clown film, Ballet Class: At Home Edition, was officially selected for the Play the Fool International Short Film Festival and her newest work, The Olympics Piece, was performed in Dance Motif 2022. She is continuing to explore her interest in combining dance, clown and physical comedy.

Janita Frantsi (performer/dancer) is a contemporary dance artist originally from Finland and now based on Treaty 6 territory in Amiskwacîwâskahikan. During her time in Edmonton, Janita has worked as a dancer, choreographer, and instructor with several organizations such as Mile Zero Dance, KO Dance Projects, Edmonton Opera, University of Alberta, and Concordia University of Edmonton. She has also created works for the Nextfest Arts Festival, SkirtsAFire Festival, Orchesis Dance Motif, Madrigal Singers, TEDxUAlberta, and various other events at the University of Alberta. Janita has a Master of Arts degree in Dance from the University of Alberta and is grateful to have received grants and scholarships from the Good Women Dance Collective, Government of Alberta, Orchesis Dance Performance Group, and Healthy Dancer Canada to continue exploring her artistic practices.

Zoette Dixon-Dyrvik (performer/dancer) is a second year university student, and has always loved performing. She started dancing at age three and the art form quickly became part of her life. She joined the Edmonton Contemporary Dancers company for two years, as well as the Rhythm Motives tap company. She received testing in Royal Academy of Ballet, Cecchetti, and Tap. Being on stage has always brought her happiness, and shei is so grateful to be performing.

Maren Vickers (performer/dancer) has studied a broad range of dance styles throughout her life including modern, contemporary, ballet, and flamenco. She danced with the Edmonton Contemporary Dancers for 4 years, while also learning the RAD and Cecchetti syllabi. She aspires to continue dancing and learning new styles throughout her years at the University of Alberta.